Tony Huszar – Drums
by deltawires on March 4, 2017 in Band Members 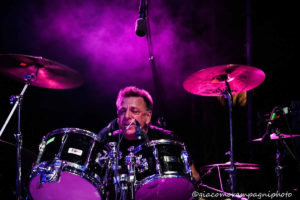 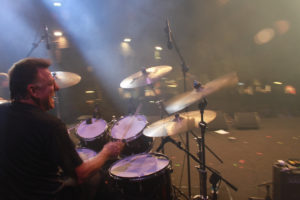 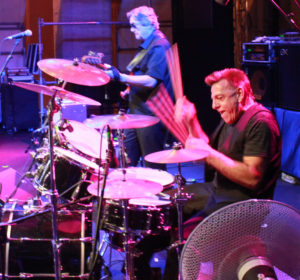 Tony Huszar is a very experienced, high-energy, kick-ass funky drummer who joined DELTA WIRES in the summer of 2000. He was raised 80 miles east of Chicago and 150 miles from Detroit, where his early influences ranged widely from blues and big band swing to Motown and Rock and Roll. Tony started formal drum lessons at the age of 7, and between formal classical training and learning to play with records that ranged in styles from Gene Krupa, Stan Kenton, and Count Basie to the Beatles, Kinks, and Rolling Stones, he was ready to help form his own first group and started performing at the age of 10. Playing with Concert and Jazz bands all through High School and also a Dixieland Blues Band, there was never a doubt how Tony’s post high school years were going to be spent.

At the age of 18, Tony saw a live performance of The Mahavishnu Orchestra featuring guitarist John McLaughlin and a drummer named Billy Cobham that changed his life. Inspired by this new and powerful instrumental Jazz fusion style, Tony helped form his own instrumental fusion group for a year and then gravitated back to his rock roots, always driven by the power and energy that is so synonymous with rock and roll. At the age of 19, Tony landed a gig with a high energy show band booked out of Las Vegas, and left his home town of South Bend Indiana for the next 4 years, playing up and down the eastern seaboard mainly from Boston to Philly, and occasionally as far south as Florida and north to Halifax, Nova Scotia. Playing 6 nighters for 4 years with only a few weeks off a year, the experience proved invaluable in helping him discover himself and create a style of drumming that he could call his own!

From there, Tony helped form an all original progressive rock group, “RuffCutt”, which toured the Midwest and shared the stage with groups like, The Ozark Mountain Daredevils, New Riders of the Purple Sage, Aerosmith, The Rossington -Collins band, and Robert Palmer. He later moved to the bay area in 1983 and performed in Northern California with The Legendary “King of Twang”, Duane Eddy, (Peter Gunn Theme), session tenor saxophonist Steve Douglas, blues guitar sensation Robben Ford, and even Chris Isaac.

Tony never gravitated too far from his roots in jazz and Blues and found himself at home in the summer of 2000 when The Delta Wires asked him to join. That partnership helped Tony complete his 360 degree return to his first love of hard driving roots music which being the drummer of The Delta Wires affords him!

“I love to lay it down and keep it tight so the rest of the band can feel free to create and never have to wonder where the groove is”!